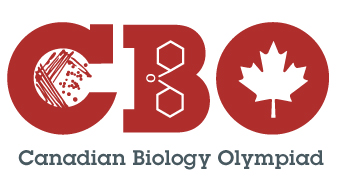 The Canadian Biology Olympiad/Les Olympiades Canadiennes de Biologie was established in 2004. The official website is http://www.canadianbiologyolympiad.ca.

Invitation letters for the particiapation in the CBO competition are sent to school teachers in early Januarry. Teachers and students can also to go to the Canadian Biology Olympiad webpage (www.canadianbiologyolympiad.ca) for details about refistration and upcoming dates and deadlines.

CBO/OCB Competition is a Two round competition.

§  Round 1: Submission of Skills Portfolio—students are invited to submit their skills portfolio (details of portfolio are released to students in early January to develop skills necessary for excellence)–submitted in April of each school year

§  Round 2: University of Toronto National Biology Competition–written toward the end of April

National Team is selected based upon scores from Round 1 and Round 2 combined (50% each).

National Skills Camp is hosted by different universities in July of each year the week before going to the IBO. Camp is focussed on the preparation of national team for upcoming IBO. In  addition, 20 students (from Grade 10-12) are invited to attend to camps to improve and develop their laboratory skills.Tests:

Round One: Laboratory Skills Portfolio

Students are provided with a series of laboratory activities to complete at their home school. Typically there are 3 lab activities to be completed under the supervision of teachers. Often video-taped evidence of lab completion is required. Portfolio details are released in early January of each school year, and portfolio is submitted in April of each year.

Portfolio are graded by the CBO committee menbers.

Round Two: Completion of University of Toronto National Biology Competition (NBC) (April of each school year)

This is a 50 mark multiple choice test written in home school.

The NBC is graded by the University of Toronto organizers.Round Student training:

Students are given NBC practice exams from previous years.

There is a National Skills Camp offered to the national team and invited students (top students returning to secondary school) the week prior to the IBO each year.  Students will practice skills and have experts in the field support their work to ensure current laboratory skills are upheld.Awarding of students, prizes:

Currently no awards or prizes are awarded for competing in the Canadian Biology OlympiadMedia coverage:

Media are contacted via Media-releases as to results from the National competition and at the completion of the International Biology Olympiad.  News media outlets are contacted throughout the country, with emphasis focused on regions of Canada from where students come from.

No government support is provided (neither National or Provincial/Territorial) for the Canadian Biology Olympiad. Most costs are covered by school registration and through student payment to cover costs to participate in camp and International Biology Olympiad.

§  Competitors must be residents of Canada and Canadian Citizens or Landed Immigrants.

§  Competitors are students of a regular secondary school for general education in Canada. In Quebec, first year CGEP students are also eligible to participate.

§  Competitors have not obtained a diploma allowing them to study at a university or equivalent institution, before the 1st of January of the year of the competition.

§  Competitors have not yet started study at a university or equivalent institution as regular or full time students.

§  Competitors must be under the age of 20 as of July 1st, of the year of the competition.

§  Competitors cannot compete in another Olympiad in the same year they are participating in the IBO.

§  At least 2 provinces should be represented.