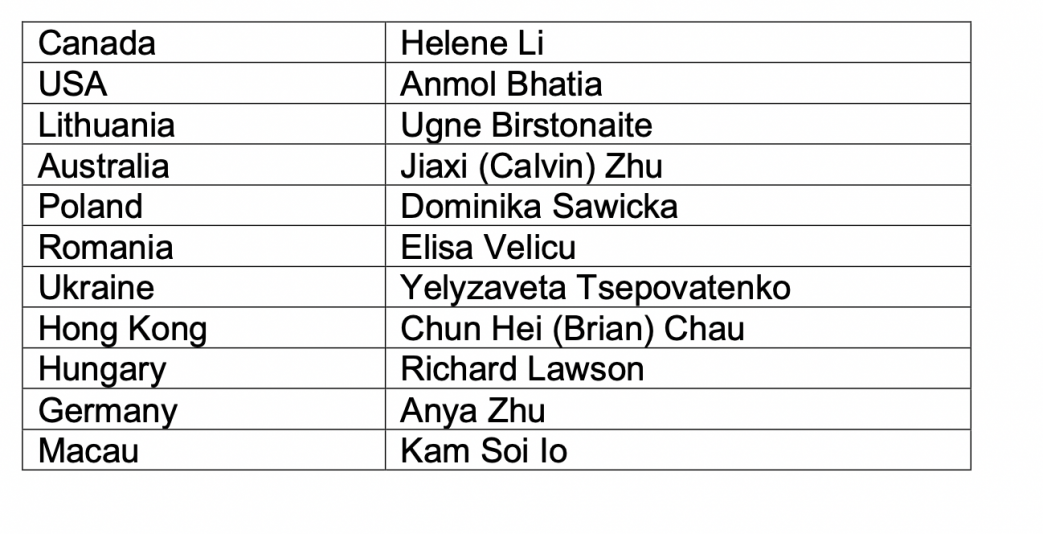 15-year-old Canadian high school student Helene Li is the 2022 International Brain Bee (IBB) World Champion. Second place went to 17-year-old Anmol Bhatia from the USA, and third place to 17-year-old Ugne Birstonaite from Lithuania. The winners were announced at the Federation of European Neuroscience Societies (FENS) Forum 2022 in Paris. The 11 finalists joined the conference stage by Zoom and were introduced by special guest and last year’s World Champion Viktoriia Vydhzak from Ukraine.

The Brain Bee is the world’s premier neuroscience competition for teenagers. The World Championship brings together students from across the world for an important educational and cultural experience A total of 31 national Brain Bee champions from across the globe took part in the virtual 2022 event held on July 2-9, hosted by FENS and organized in collaboration with the Paris Brain Institute. Each competitor had previously won their national or regional Brain Bee to qualify for the international championship.

The challenging competition was conducted in two parts. All competitors completed four separate tests (written exam, neuroanatomy, neurohistology, and patient diagnosis) under pre-arranged supervision within a 3-day timeframe at the beginning of the World Championship. Based on their total combined scores, 11 finalists advanced to the Live Judging Session, a question-and-answer round with four prominent neuroscientist judges.

The IBB World Champion will receive a monetary prize of US $3,000, a personalized plaque and a medal. The second and third place winners will also receive a medal and monetary prizes of US $2,000 and $1,000, respectively. In addition, Leadership Initiatives, a long-standing partner of the IBB, awarded the top three finishers a full scholarship to their 2023 Virtual Advanced Medical Neuroscience Internship or Advanced Medical Public Health Internship. “International Brain Bee competitors stand above their peers as some of the most inspiring, collaborative, curious, and dedicated students

Dr. Jean-Antoine Girault, FENS President, said “It was a delight to host the International Brain Bee world championship at the FENS Forum 2022 this year. Although virtual, the event still took place on centre stage and inspired an audience of over 7,800 scientists. It was an honour to celebrate the achievements of these extraordinary high school students, our scientific future!”

Helene Li ‘took home’ another prize, the 2022 IBB Neuroanatomy/Histology Award, as the competitor with the top scores in both the neuroanatomy and neurohistology components of the competition. The prize consists of US $100 and a book on the works of 1906 Nobel Laureate Santiago Ramon y Cajal.

In addition to the competition, the World Championship program also included a cultural video exchange, keynote lectures, a Neuroethics team debate, an interactive neuroscience demonstration, and a career panel. Most of the session, including the Opening Ceremony and Award Ceremonies were live streamed and can be viewed on YouTube: https://www.youtube.com/channel/UCQ9D_oKrYwFUKYacJdGkL0w

Dr. Jaime Diaz-Granados, IBB Board Chair, commented, “Our Brain Bee champions are truly amazing and are the future generation of neuroscientists, doctors, and other science professionals. It is what inspires our partners and sponsors. Together, we look forward to following their academic and career paths.”

The IBB was incorporated in 2018 as non-profit educational organization. The IBB’s Board is comprised of six governing partners: the Alzheimer’s Association, the American Psychological Association (APA), the Dana Foundation, the Federation of European Neuroscience Societies (FENS), the International Brain Research Organization (IBRO), and the Society for Neuroscience (SfN). Other partners and sponsors of the IBB include Leadership Initiatives, the International Youth Neuroscience Association, and CollegeAdvisor.

Table 2: Listing of remaining participants in alphabetical order by country