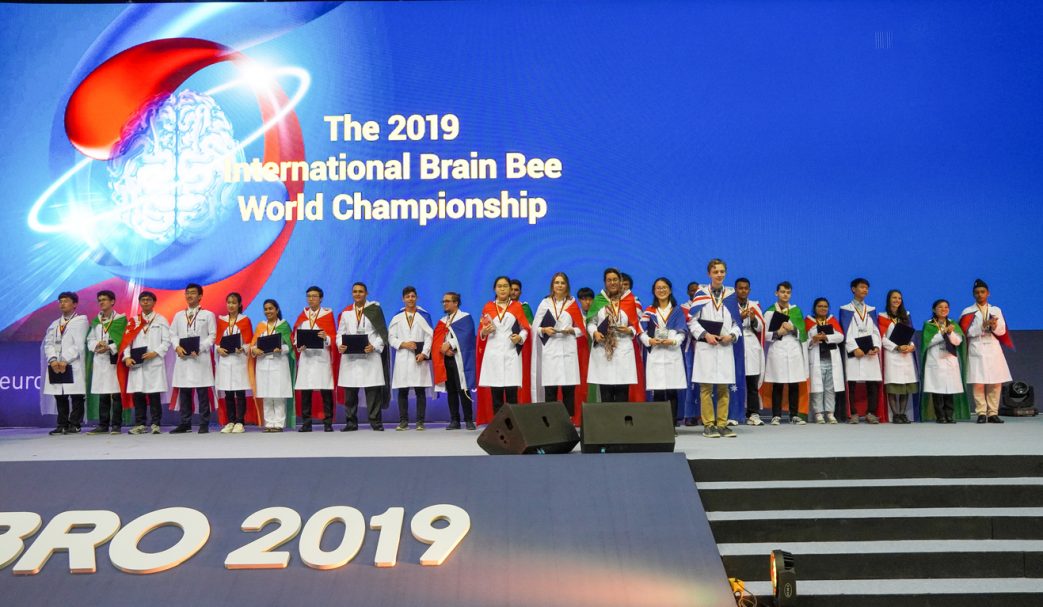 The 21st edition of the International Brain Bee (IBB) World Championship will take place September 19-23, 2019 in Daegu, South Korea, in conjunction with the 10th World Congress of the International Brain Research Organization. Twenty-eight competitors, each representing their respective nations, will contend for the title of World Champion through a series of five events designed to test their knowledge and understanding of the human brain.

To reach the IBB, the current competitors all had to excel by winning the first two levels of competition: their local and regional (national) Brain Bee. There are currently 175 local Brain Bee competitions around the world, with volunteers creating Brain Bees in new cities and countries each year.

The multi-day event includes one and a half days of competition sessions, hosted by the Korean Brain Research Institute, Kyungpook National University, and the 10th IBRO World Congress. The competition involves a neuroanatomy and histology component, a patient diagnosis section, a live question and answer round, and a written exam. Competitors are tested on their knowledge of the human brain including such topics as intelligence, emotions, memory, sleep, vision, hearing, sensation, Alzheimer’s disease, Parkinson’s disease, schizophrenia, addictions and brain research. Participants are scored in each section of the competition, and results will be announced at the awards ceremony on September 21st, where the winner will receive 3000 USD, a trophy, a summer internship, and the right to represent the Brain Bee around the world. After the competition, the students will participate in a cultural sightseeing tour of Daegu.

In its essence, the IBB hopes to bring together the next generation of young scientific minds, and create the opportunity for these aspiring neuroscientists, doctors, and biologists from across the world to connect while engaging with a subject they are passionate about, which holds enormous promise, and has the potential to positively affect millions of lives – the brain.

Follow us at www.facebook.com/internationalbrainbee and using the hashtag #ibro2019.

The competing regions and their representative competitors are as follows: