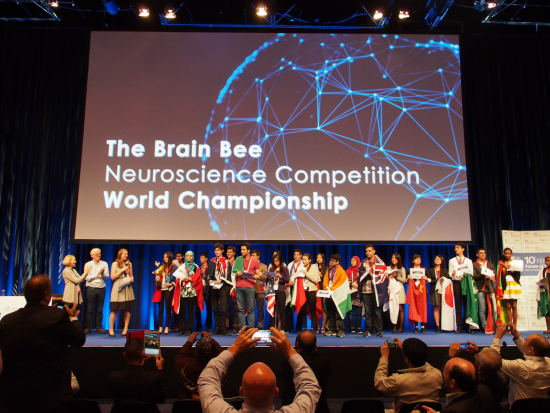 In its eighteenth iteration, 2016 was a record-breaking year for the Brain Bee World Championship Neuroscience Competition, held from June 30 – July 4, 2016 in Copenhagen, hosted by the Federation of European Neuroscience Societies (FENS) 10th Forum of Neuroscience. It was the largest program to date, engaging twenty-five student National Champion participants from all corners of the globe. For the first time, a student representative from a European nation has achieved 1st Place!

The 2016 Brain Bee World Champion is Ana Ghenciulescu, a 16-year-old student of mathematics at the “Mihai Viteazul” National College Bucharest. Following the Neuroanatomy, Neurohistology, Patient Diagnosis, Written Exam, and Live Judging Sections, Miss Ghenciulescu ranked highest among the participant pool. Her performance at the final live question-and-answer round was most impressive, with the top score of 24 of 25 extremely difficult questions, placing her solidly in first place. Miss Ghenciulescu was awarded a $3,000 USD cash prize, a Society for Neuroscience-sponsored summer laboratory internship, and a trophy.

Miss Ghenciulescu previously ranked among the top 10 finalists of the Romanian National Biology Olympiad and won a science paper contest by researching and writing about the new field of Optogenetics and its applications in neuroscience. Since middle school, she has regularly taken part in several mathematics, creative writing and foreign language competitions.

Finishing in 2nd Place was Canadian Representative, Nooran AbuMazen, of Waterloo Collegiate Institute, earning the $2,000 USD Prize. During the competition, Miss AbuMazen achieved 1st Place in both the Written Exam (with a perfect score) and Neuroanatomy. In 3rd Place, New Zealand’s Matthew Z.M Fulton, of Auckland Grammar School, finished in 3rd Place, receiving a $1,000 USD Prize. Mr. Fulton was the top student in the Neurohistology Practical and placed 2nd in the Patient Diagnosis Practical. In 4th and 5th Place were Iranian National Champion Shayan Bagher Baragoori, of Mirzakouchak Secondary School, and American National Champion Karina Bao, of Little Rock Central High School, respectively. Biographies and photos of all student participants are included in the event program, downloadable from the website: www.theBrain Bee.org.

The expert judging panel was a world-class group of neuroscientists representing nine nations and multiple areas of research:

Speaking during the Opening Remarks were Dr. George Paxinos, the third-most cited author in science and co-author of the textbook used for competition preparation, Dr. Menno Witter, FENS representative and Professor of Neuroscience & Director of the Norwegian Research School in Neuroscience, and Dr. Julianne McCall, Director of the 2016 Brain Bee World Championship. Dr. Alison Abbott, Senior European Correspondent of Nature, presented the Awards Ceremony in front of more than 4,000 attending scientists, assisted by Dr. Paul Bolam, representing the judging panel, and Dr. Julianne McCall, on behalf of the Organizing Committee. Photos may be viewed on the website and social media channels.

In addition to the competition sections, students engaged with neuroscientists at the conference through tours of the poster session and exhibit hall, seminars, the Opening Ceremony, and special introductions to the FENS community from 2016 FENS-Kavli Scholars. Apart from the conference and competition sections at the University of Copenhagen (hosted by Professor and Director of Anatomy, Dr. Jørgen Tranum-Jensen), students and adult chaperones enjoyed a tour of the Medical Museum of Copenhagen, an introduction to the Danish Stem Cell Center, complete with seminars from three researchers and a tour through the laboratory facilities, and cultural and culinary opportunities in and around the historic district of the city.

The program was organized on a volunteer basis by a committee of neuroscientists, professors, graduate students, and educators across nine nations, with support from the following partners: The Federation of European Neuroscience Societies, the Society for Neuroscience, the University of Copenhagen, Heidelberg University Hospital Spinal Cord Injury Center, and the Danish Stem Cell Center. More than 50 National Coordinators around the globe are responsible for local, regional, and national competitions, leading up to the culminating international contest, hosted by a large international neuroscience conference every year. Contact details for all coordinators may be found on the website: http://www.thebrainbee.org.

The International Brain Bee (“Bee” is an English synonym for “contest”) is a neuroscience competition for young students, 13 to 19 years of age, established in 1999 by Dr. Norbert Myslinski of the University of Maryland, Baltimore. Worldwide, there are around 175 local competitions every year in 50+ nations across all six continents. The permanent website for the program is www.internationalbrainbee.com. As the most widespread neuroscience competition for secondary school students, the Brain Bee seeks to engage young students in exploring the diversity and depth of the mechanisms of the brain, including neurological diagnoses, neuroanatomy and neurohistology structures, and chemical neurotransmitters that facilitate memory, movement, emotions, and the senses. The program provides the motivation, curricular resources, and community support to take them beyond their classroom experience to the level of international competitiveness through providing materials and coaching. Following the event, an Alumni Club supports participants’ careers in higher education with scholarship awareness, internship assistance, science news, and community.